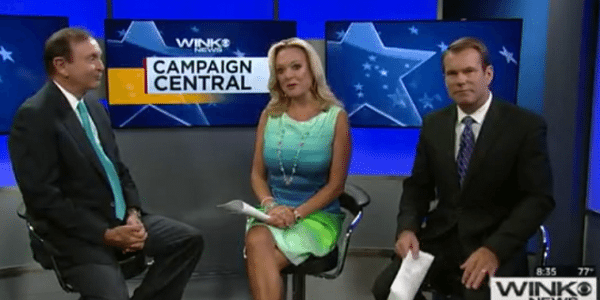 Campaign Methods in the 2016 Presidential Race

Campaign Methods in the 2016 Presidential Race vary from candidate to candidate. With new polls showing Hillary Clinton at 50%, Donald Trump at 37%,Gary Johnson at 7% and Jill Stein at 2%, what can the candidates do to improve their standings?

In the most recent episode on WINK News (CBS Florida) Campaign Central, the hosts speak with political psychologist and WINK News political consult Dr. Bar Rossi, PhD about Trump’s last speech, Clinton’s interview on Fox, and what each needs to do to improve their numbers.

The newest monmouth University poll Dr Rossi says, from first-hand experience he believes are real.  He talks about Trump needing to shift out of primary mode and into general election mode by getting specific on the issues. “Trump recently talked about a tax plan, he provided numbers and generally came across as knowing what he was saying. This is a good first step.”

As for Clinton’s interview, he says “She talks too much, She should have mentioned it, apologized and moved on.”

The discussion shifted to methodology, specifically talking about the ground game. Watch this recent episode to see what the WINK News Campaign Central team had to say, and what the candidates can do to improve their poll numbers.

Campaign Methods in the 2016 Presidential Race