In 2017 the Trump DOJ sought and obtained private communications of CNN Pentagon reporter. This included email and phone records. Barbra Star reported on stories regarding military options being prepared for then President Trump on North Korea, Syria, and Afghanistan.  This is the second time in as many weeks that the Biden DOJ has notified reporters that their personal and work communications had been obtained by the Trump DOJ as far back as 2017.

Rep. Adam Schiff, Chair of the House Intelligence Committee, recently called for an investigation when it came to light that his communications data was also obtained. Schiff condemned the action as a terrible abuse of power.

“It also makes the Department of Justice just a fully owned subsidiary of the president’s personal legal interests and political interests.” – Adam Schiff in a recent interviw.

As the New York Times first reported on the Trump DOJ investigation findings, there were targeting Democrats. In an attempt to hunt down leaks, the Trump DOJ subpoenaed Apple to turn over data. They targeted at least two Democrats on the Intelligence Committee, but also their family members, including a child. Between 2017 and 2018 there were at least twelve people targeted. It began under Attorney General Jeff Sessions hunting for the leaks behind conversations between Trump allies and Russia. Ultimately, none of those targeted were found to have any connection to the leaks.

When William Barr became Attorney General, he revived the hunt. According to the New York Times article “He moved a trusted prosecutor from New Jersey with little relevant experience to the main Justice Department to work on the Schiff-related case and about a half-dozen others.” 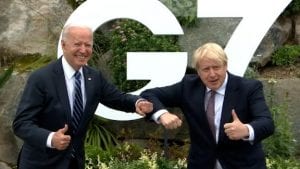 President Biden made his first European trip. It will kick off with the G7, followed by a meeting of NATO, and a U.S. – E.U. summit. At NATO he will likely attempt to rebuild the alliance, after Trump’s impact.

His message for his European trip is to build a united front on global issues, including climate change, NATO, and cybersecurity. Prime Minister Boris Johnson, who Trump often had kind words for, described Biden as a “Breath of fresh air.”

But, it hasn’t been all rainbows and puppy dogs for Biden. Pro Brexit voices within Johnson’s cabinet have reverted to Trumpian rhetoric, saying “Unfortunately [Biden is] so senile that he probably won’t remember what we tell him anyway.”

President Biden will then sit down for a summit with Putin of Russia. The White House sees it as an opportunity to raise concerns of “their behavior.”

Trump, always seeking attention, weighed in on Biden’s upcoming meeting with V. Putin. In an article by the New Zealand Herald, they quoted Trump saying:

He went on to make it clear he believed Putin over his own Government. But then what have we come to expect from Trump? He insists that the world is now laughing at the United States, never recognizing that the world — with the exception of Russians and Pro Brexit voices — was laughing at him. What will his base say?

IN THIS EPISODE ON WINK NEWS

In this short clip, Dr. Rossi discusses the DOJ investigations,