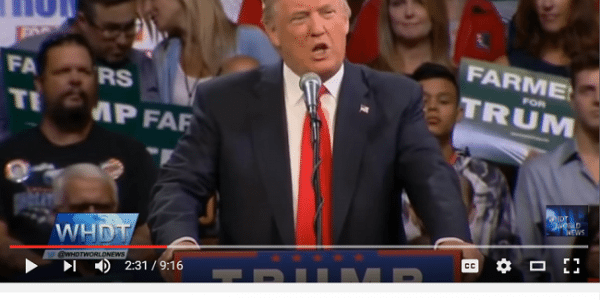 Donald Trump From a Psychological Perspective

Donald Trump from a psychological perspective –as he raises money and then bashes the media. Some continue to question his temperament, and misdirection. Other’s say he is playing the media? Is his judgement in question? Does the media treat Trump unfairly?

Danielle Masterson invites political psychologist Dr. Bart Rossi PhD as a guest to WHDT News to assess Donald Trump and Hillary Clinton from a psychological point of view, both of them as well as their followers.

It was another wild week of the wildest election cycle in our time.  While Trump is in the news all the time, Hillary has not been. The NY Times ran an article noting how the media is trying to even the field but, Trump is driving high viewership and ad sales. Thus he has gotten much more of the spotlight; Hillary’s recent appearance was not covered by the media so they could run a live feed of a Trump press conference.

Dr. Bart Rossi, PhD. speaks about this, insights about Hillary Clinton the candidate and more.

Alabama Senate Race, Opioid Use Spikes In U S, Dr Bart Rossi Phd Analyzes Super Tuesday 2016, The Psychology And Politics Of Extremism, Robin Williams, Iraq Crisis How Does This Impact The Economy And Gas Prices, Day Two Of The Dnc With Dr Bart Rossi, Michael Cohen Testifies Against Trump, Gov Christies Relationship With The Media