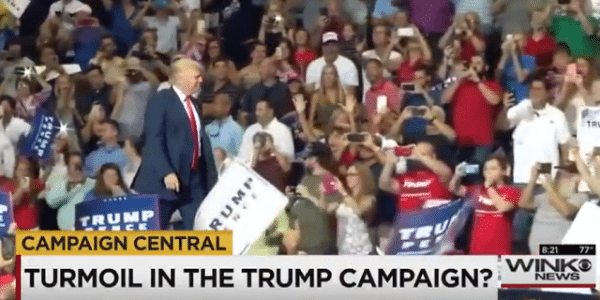 Dr. Bart Rossi Analyzes Trump Vs. the GOP on the latest edition of WINK News Campaign Central (WABC Florida). Republican leaders are speaking out about their frustrations with Donald Trump. There have been some that now say they will note vote for him based on his latest escapades. WINK News Political Consultant Dr. Bart Rossi took a closer look at the split party and what it could mean for the November election.

REP. Adam Kinzinger has said publically that Trump is crossing a lot of  lines that unforgivable in politics.  And there is infighting with Donald Trump refusing to endorse some down ticket candidates. Dr. Rossi said “this is all about Trump. Usually at this point it should be about two personalities: Hillary and Trump. But it’s not. Within the GOP it is all about him. The next five days is key. If his numbers fall then I think you’ll see more republican leaders moving away from him.”

With Donald Trump saying that if a young women is harassed in the workplace, — and asked about his daughter in particular – that she should walk way, their is a lot of speculation how damaging it is to any support he might have gotten from women. There is division with Pense and the endorsement issue regarding Paul Ryan.

Dr. Rossi as a career clinical psychologist talks about Trump’s narcissism and how things might play out.