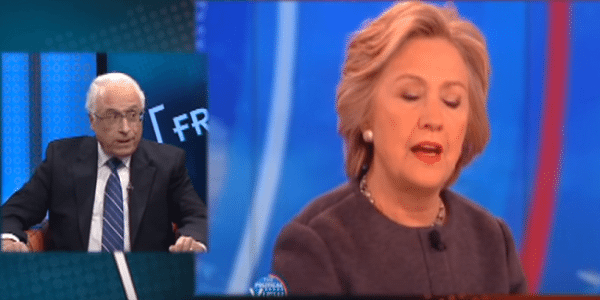 Political psychologist Dr. Bart Ross PhD says Clinton beats Trump in a general election, but also defends Trump regarding the convention.  Joining host Logan Crawford, with guest panelists Alain Sanders and John Boyd, on the EMMY winning Fresh Outlook, the panel this week discusses a lot of issues in this year’s Road To The Presidency.

In a dynamic discussion this week, the panel talked about the Democratic Debate, a possible contested GOP conversion, the candidates themselves and Sanders winning 7 of the last 8 primaries.

The democratic debate was dynamic according to Dr. Rossi, “Ugly at times, but robust where each candidate talked on the issues and made their positions. And that’s the way a debate should be. I thought they both did very well stating their positions. ”

There is a new rumbling this election season as the process doesn’t seem democratic. Bernie keeps winning state after state and still trails Hillary in delegates, and Trump has been the dominant force in the GOP race all season yet may not get the nomination.

John Boyd feels Trump lacks the organization that the Cruz campaign has, but it’s interesting watching Trump use his media skills to brand any effort to withhold the nomination from him (providing he is still the dominant GOP candidate) at the convention as a ‘trick, or not legitimate.”

When Mr Crawford asks if the process is undemocratic, Alain Sanders jumps right in: “No, it’s not undemocratic at all.” He goes on to point out that it is the general election of President that is the democratic exercise;  this is a selection of the nominee and, that while it is good to have the general electorate involved, the delegates have to have their say too. He feels that Trump is a whiner and bully who knew the rules coming in, and if he didn’t then why is he even running? He says that for the nomination selection, it should have a party component. They go on to discuss what happens if you try to cut out the party officials  as the democrats did in the 1960’s.

Dr. Rossi disagrees, and though not a fan of Trump, feels he is correct in calling foul. And predicts he will get his momentum back, win big in New York, New Jersey and California and have a psychological advantage.

As they turned their discussion to Sanders, Crawford notes that while they are polar opposites on policies,  he’s new kind of political animal — one who seems to be authentic, honest, and likable. Clinton he noted moves her positions and that may be her Achilles heel. Alain Sander says yes, but that Trump and Sanders have bigger Achilles heels, and goes on to make very good points. \

Dr. Rossi felt that people followed Sanders by emotion, and Clinton by the mind, and that is why she’ll win the nomination and the Oval Office.