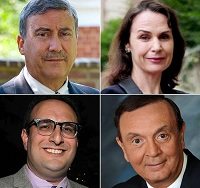 HEADLINE: Our Daily News political team watched the VP debate with a panel of experts including the Bronx Science debate team coach and a political psychologist. See how they grade the two candidates vying for veep.

The panel rated each vp candidate on the merits of Substance, Style, and Likability, then offered a summary take-away and a grade.

Each had their own take on the VP candidate debate, click below to see what they had to say, and why.