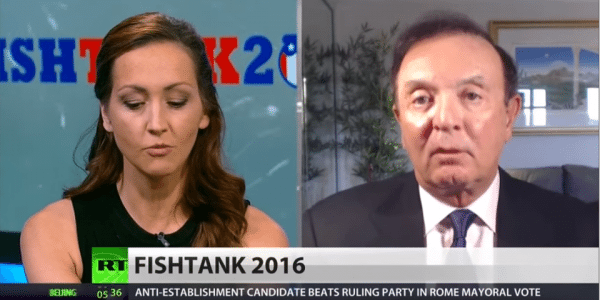 Is The 2016 Presidential Election Lacking a Winning Personality?

Is the 2016 Presidential election lacking a winning personality? According to Dr. Bart Rossi, PhD., a clinical and political psychologist, the answer is yes. As a guest on RT Fish Tank he speaks with host Lindsay France about the gestures and mannerisms of the candidates and what they mean.

Lindsay France flew right past all the other news out there — Chelsea Clinton gave birth to a baby boy,  Corey Lewandowski who once quipped “let Trump be Trump,” was just dumped by the Donald, and all the hubbub around the upcoming GOP convention as a anti-Trump group gear up.

Instead, Ms. France wanted to focus in on gestures and mannerisms of the candidates and what that means, if anything at all.  She notes that many ball their fists then point to the crowd. Do coaches tell them to do that?

Who was the most fake candidate this election year? Dr. Rossi weighs in on his evaluation about the candidates gestures, mannerisms, and what they’re trying to present by them.  According to Dr. Rossi, most of these candidates think that the policy issues, how conservative or liberal they are,  or the ability to fire up the masses are the essential points. What they miss is that personality that comes across as honest, believable, authentic, and consistent are all important factors in a winning personality. When you talk about a winning personality, the above are only certain traits of that. Likability too is important. Former presidents who understood this, and worked at it, learned how to present as well as be better listeners include Ronald Reagan, Bill Clinton, and even Obama.

Is The 2016 Presidential Election Lacking a Winning Personality?