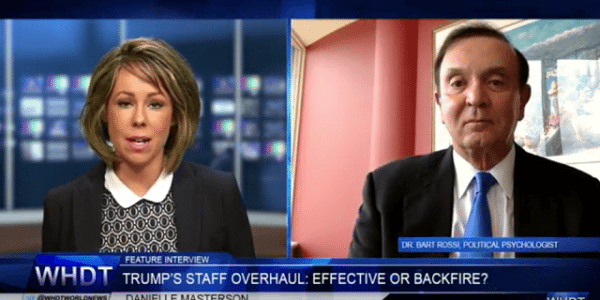 New Trump campaign positions are seemingly beginning to appear since the arrival of Kellyanne Conway. The word ‘shakeup’ used by much of the media for his campaign staffing changes, the Trump campaign itself says is a “staff expansion.” However, recent scrutiny of the ties between campaign chairman Paul Manafort and Russian influences didn’t go unnoticed.

Trump and Giuliani are raising Clinton health questions. Fact or spin? Are these assertions shallow? Dr. Rossi says yes: “When they show her [Clinton] on screen moving her head, and then suggest she may have a medical condition, I think the effort is very underhanded and shallow. Showing her after a day on the campaign trail being peppered with questions, she is shown moving her head. I’m a career clinical psychologist and I don’t see anything in those clips to support what they’re alleging.”

On the Trump immigration stance, Donald and the campaign in general seem to be softening the tone and distancing a bit from what he said early on. When asked about the immigration plans, Kellyanne Conway is now deflecting his hard edge, saying things like we’ll look into it more fully.

Trump seems to also now recognizing that he cannot win the presidency without the minority vote. So he is beginning, albeit late, to them; promising them a better life and asking “what do you have to lose? ”

According to Dr. Rossi, based on his artical “A Winning Personality,” one of the ingredients is consistency. Trump has alienated minorities, but now he is trying to move towards them in his speeches. But is it too little too late?

Dr. Rossi notes that “Trump is speaking at them, not to them.” And, while he certainly needs to begin a dialogue with minorities, Dr Rossi questions whether this new shift gives the perception to his base that he is now flip-flopping?

Watch the full episode (9;35) to hear Dr. Rossi’s opinions and observations about these topics, and the things Trump should be — but is not — doing.