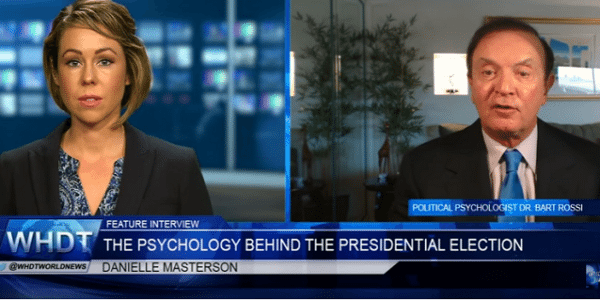 The Psychology Behind the Presidential Election

The psychology behind the Presidential election looks first at hillary Clinton Vs. Bernie Sanders, and then at Donald Trump Vs the Republican elite. A WHDT News interview with political psychologist Dr. Bart Rossi PhD.

What is Bernie Sander’s agenda? he is trailing by about 3 M voters, so he has to reply on the delegates.  Dr. Bart Rossi commented that Bernie has risen up to be the best candidate of the election season, despite not the leading one. “He is the most honest and authentic personality on the election trail. But I don’t think he can capture the delegates, so what is his end game? I suspect he knows he won’t win, so his pressing on suggests another motive. Perhaps it is to capture the VP slot so that he has a platform for his views.

Donald Trump has some convincing to do on the Republican side. Dr. Rossi suggests that if Trump were to blow off Ryan as Chairman, he might just come off as more powerful to his followers. “I don’t expect Trump will acquiesce much, if at all, to Ryan. And I don’t think — in his mind — that he cares about unification of the party. He thinks he can win it without them”

The psychology behind the Presidential election