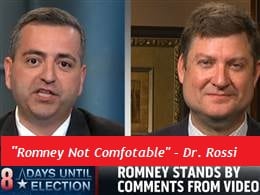 Romney Not Comfortable In His Own Skin says Psychologist

VIDEO: Doctor Bart Rossi is featured as a guest panelist on MSNBC’s Jansing & Co., hosted by Chris Jansing. Dr. Rossi discusses the psychology behind Republican presidential candidate Mitt Romney and his inability to connect with voters, stating that “Mitt Romney is not comfortable in his own skin.” Is Mitt Romney believable?  Watch the clip to see what Dr. Rossi has to say on the matter.

The panel has many opinions, but Dr. Rossi stands strong on his opinion about Mitt Romney lacking the ability to connect with voters.

Visit NBCNews.com for breaking news, world news, and news about the economy