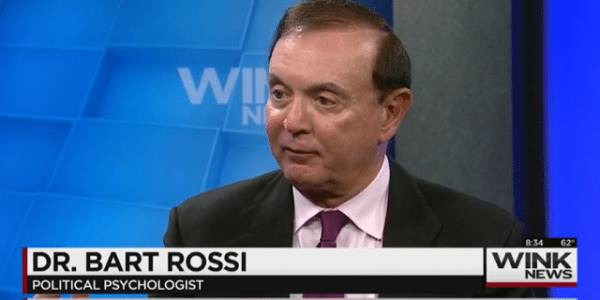 The Security Plans of President Trump

The security plans of president Trump have been under fire.  Political psychologist Dr. Bart Rossi, PhD stops in to the WINK News studio to discuss the psychology of  the Trump security plan.

The is a psychological conflict according to president Trump. says Dr. Rossi. He has to approach security because he promised it, and that has led to the travel ban and the wall. But he hasn’t sold his case to the American people. There has been push-back resulting in worldwide demonstrations, and now the courts have blocked the executive order as well.

He gets credit with his supporters for focusing on security. But his message has not been clear. “His team has floundered a bit; it’s been a rocky start. Nonetheless he needs to sell his immigration vision to his own party, let alone the broad swath of the American people” says Dr. Rossi.

Trump has lashed out again the court rulings, but note that two were Republican-appointed judges, so it is difficult to argue partisanship. And even other republicans like Graham and McCain have been opposed to the executive order.

Dr. Rossi has said often that Trump is an authoritative personality, and as such tends to try to push through any blockage. He won’t publicly apologize, pivot or admit defeat in any context. He simply pretends the results are different from what they really are and speaks false facts as truth.

“We have to give every new president time to settle in, but president Trump needs to regroup and come up with a plan that the American people can support.”

The Security Plans of President Trump