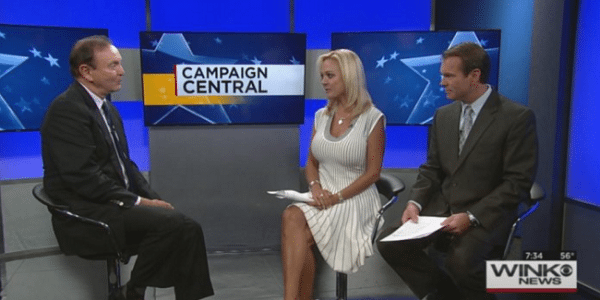 The Trump White House Effect is on everyone’s mind; those that believe in him and those that don’t. How does it play out psychologically? Dr. Bart Rossi, PhD, a political psychologist stopped by the WINK News studio to discuss how Trump can bring America together and as our 45th president accomplish his goals.

It was combination of disbelief and jubilation that swept through the United States when Donald J. Trump won the 45th presidential election.  But despite his non-stop attack campaign, he now says he wants to unify a deeply divided nation.

In his victory speech he praised Hillary Clinton and called for unity. Just that slight change of his tone went a long way in soothing the panic that drove the world stocks plunging — when it looked as though Trump would win the election. The dollar too dipped against most world currencies. It’s bounced back a bit since then, so now what?

While there was almost a 50/50 in the popular vote, the Republicans have now essentially grabbed all the levers of power. They are going to move with little restriction to shape the nation in their world view of what it should be.

There are many who are excited with that “Make America Great Again,” with others extremely anxious.

Trump is an authoritarian, the guy in charge, the boss. he likes that role, perhaps eve relishes it. Dr. Rossi is quite confident that Trump will move the country towards all his big campaign promises; on trade, immigration, and corruption. And he’ll wants loyalists. So his first big battle may be with Paul Ryan.

Dr. Rossi gives Trump credit for his speech; “I thought it was quite good.”

However, he made a lot of promises to his base in the campaign, and they’re going to look for him to deliver on those promises. Dr. Rossi says he believes he will, or at least try to satisfy his base.

What is the psychology of the Trump whitehouse? Click below to watch the episode.