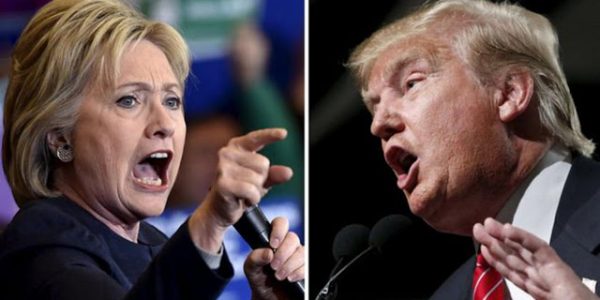 Trump and Clinton Slugfest on the campaign trail is Donald Trump going after Hillary Clinton on pay for play, and the email scandal, and she going after him simply by saying “He has take  hate movement mainstream; he has shown us who he is. So who’s strategy is working?

Rob Spicker and political contributor Dr Bart Rossi, PhD discuss this and other topics. Hillary Clinton has been out of the spotlight raising money, staying quiet and letting Trump be Trump. Is he self imploding? Is her strategy of letting his own words and action hurt him?

Dr. Rossi suggests that much the way Al Gore lost the election with his personality, Trump may be following in those footsteps in a different way.

Donald Trump has shifted the words he is using on immigration. His previous hard line on building the wall, deporting 11 million illegal aliens was the center point of his popularity among conservatives. His recent pivot according to reports is generating a back lash on him. But without the pivot he can’t reach the wider base he needs to win.

Recently he has begun talking to minorities, though Dr. Rossi suggests that he is talking about them, and at them, but not to them. “If he was speaking to them, and wanted the minority vote why hasn’t he gone to any of the invites he has been extended, like the Urban League or the NAACP? It appears more that he is not pitching those minorities, but rather making it look that way to pull in white moderate voters.