The Trump impeachment trial divide is as wide as ever as Congress moves towards a Senate impeachment trial. What can we expect? How will it help, or hurt Trump on Election Day? Dr. Bart Rossi, Ph.D. gives some insights.

With Americans weary with impeachment fatigue, the battle continues. It all began with news of a whistleblower complaint about to become public. The Trump administration within two days quickly released previously held up military aid to Ukraine.

Some argue the president engaged in quid pro quo for personal gain, using the aid and a coveted White House visit as leverage. Other’s suggest he did nothing wrong and the timing was coincidental.

An impeachment inquiry was launched by the House.  And after sworn testimony by Trump appointees, career diplomates [who’ve served under both parties],  texts, and phone records, as well as legal and constitutional scholars, the House voted for Articles of Impeachment against President Donald J. Trump.

Now the process moves to the GOP-led Senate.

So what can we expect?

Think of the impeachment trial like you would any other trial. The president is the defendant. The Senate members are the jury. The Majority leader (Mitch McConnell) is the jury foreman, and Chief Justice Roberts is the judge.

Some Republicans have been vocal about wanting a speedy trial. Judiciary Committee Chairman Lindsey Graham said he didn’t need to see any evidence or listen to any witnesses: he is ready to vote, now. “I’ll do all I can to make impeachment die quickly,” Graham said.

Majority leader Mitch McConnell noted in a statement recently that he is coordinating with the president’s lawyers about the trial. Democrats wonder how if McConnell and Graham have already made up their minds before the trial even begins, that they won’t be in violation of the trial oath all the members will take?

Questions are swirling around Washington D.C. as to whether there would be witnesses called, and if so, who?  There was talk that fierce Trump supporters on Capitol Hill wanted to call Joe and Hunter and the whistleblower as witnesses. Critics are calling it political theater. After all, everything in the whistleblower complaint has been corroborated by multiple witness testimony and records. There was also GOP talk of calling Congressman Adam Shiff. 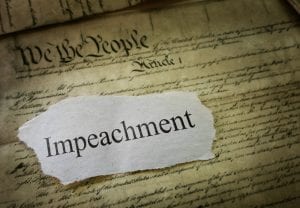 But the real fact witnesses, thus far, have refused to testify. Mick Mulvany, Mike Pompeo, and Rudy Guiliani were all at the heart of the alleged pressure campaign on Ukraine.  If anyone could exonerate the president, and provide the defense explanations that to date have been lacking, it would be them. But, Trump had ordered them to refuse to cooperate with the Congressional inquiry. So no one expects President Trump to suddenly reverse course and now tell them to testify in the Senate trial.

More to the point, however, is the trial itself. McConnell and Schumer have been clashing over setting the rules to govern the trial. McConnel openly rejected the witness requests by Schumer.

The partisan jousting is nothing new, however, going all the way back to the GOP refusing the vote on President Obama’s nomination of Merrick Garland to the Supreme Court in 2016. And it has continued every year since on big issues as noted in The Hill.

In this episode of Wink News This Morning, Dr. Bart Rossi talks about those in the middle. Fierce defenders of president Trump will vote to acquit in the senate.  Voters that support him will remain unmoved. Critics of Trump will see the acquittal as partisan blindness to what they say is overwhelming evidence of abuse of power, and obstruction. Legal and historian scholars weighed in. Many say that Trump’s actions were at the heart of what the impeachment clause in the Constitution was written for. If this isn’t impeachable conduct, what is? they ask. As during the Mueller probe on Russia and Trump’s actions regard to that, supporters of Trump seem equally unmoved by legal and constitutional experts regarding the Ukraine scandal.

The question Dr. Rossi addresses is how those in the middle are affected. Will voter sentiment grow for removal and put pressure on Senators to reconsider acquittal? Will it affect them come election Day?