After all the intense Trump impeachment debate, it’s time for the Trump Impeachment Trial. For only the third time in American history, the president has been impeached. So welcome to act II in the Trump impeachment saga. Political psychologist Dr. Bart Rossi, Ph.D. was in the studio to comment.

From the day Donald J. Trump rode down the escalator at Trump Tower and announced his candidacy, it has been a reality show. He says outrageous and unpresidential things, takes to Twitter almost nonstop and continues to fill stadiums for rallies. Donald Trump has never felt constrained by his office to say whatever he wants to. Recently in Michigan, he attacked Congresswoman Debbie Dingle, while also eluding to her late husband possibly being in hell.  In a very rare rebuke of Trump by Republicans, members of Congress did exactly that.

Whether you love him or don’t, President Trump is divisive and has been so from the start. Some say that he thrives from chaos, and he creates it by design. Other’s will say it’s his style.  In a recent Miami Herald article it noted:

Trump trusts only Trump to say the right thing, which leads to confusion and chaos

We’ve seen him in public statements to always profess to be the smartest guy in the room. He “know more about” technology, warfare, and hurricanes. He spouts misinformation on a regular occurrence.  For example, the unemployment rate in late 2016 he said was really 18+ %, not the 6% the Obama government stats showed. According to him, they were lying at worst or misleading you at best. Once he took office, however,  suddenly the number (having dropped another point or two) was real, and all thanks to him.

We endured through the Mueller Investigation and Report, with President Trump alleging that President Obama “wiretapped him”, and that the entire investigation was an “illegal and a biased” attempt at a coup to “take-down” a president. He was thrilled when Attorney General William Barr announced the IG would launch an investigation into the investigators. He wasn’t happy with the findings that (A) the investigation was legal, (B) had a valid predicate to be launched, and (C) that there was no evidence of a biased political motive. In fact, while we all know that Lisa Page and Peter Strzok were anti-Trump, the investigation also unearthed F.B.I agents that were texting pro-Trump messages.

That didn’t stop him from saying “its worst than we imagined”. He then repeated the false narrative that it was an illegal politically motivated attempt to take him down.

The Mueller investigation came and went, and although outlining contacts with Russia that Trump previously said were fiction, and a possible 10 counts of obstruction, no actions were taken. 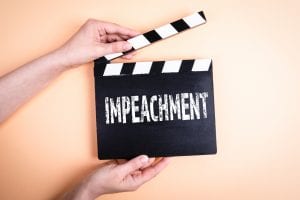 Fast-forward to September 2019. A whistleblower report was filed, and a new scandal emerged. It claimed Trump in a July 25th phone call, used his office to leverage Ukraine for personal political gain. In quick succession,  Trump cried foul and that his call was “perfect,” “read the transcript!”

Note that the transcript was not verbatim as he described (with a disclaimer right on the transcript saying so), but Congress read it anyway and promptly opened an investigation. It then moved to an official impeachment inquiry, where the president refused to release any documents, nor allow anyone in the executive branch to testify. Some defied his wishes and testified anyway.

After an on-going clash with Republicans contesting the “process”, the President of the United States was impeached this week by the House of Representatives, mostly along party lines. It is only the third time in the history of the republic to have occurred. Like the Mueller investigation, Trump again is claiming it is an “illegal witch hunt.”

Next, Act II — the Senate Trial.

ACT II in the Impeachment Saga

In this segment on WINK This Morning, Dr. Rossi talks about the trial and what to look for. Will there be witness called? McConnell has said no. Lyndsey Graham says he is ready to vote and doesn’t need to see or hear anything else, that he will do anything he can to let the trial die in the Senate. What would witnesses mean for Trump?