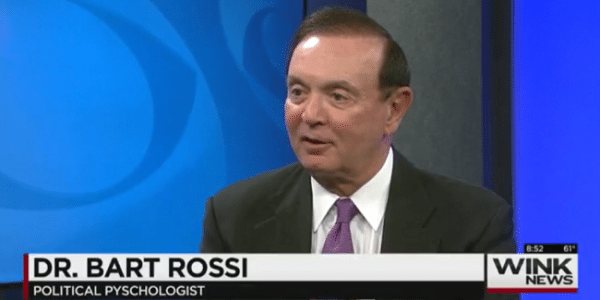 The Trump press conference ignited discussions among some, disdain or jubilance among others. Trump was again the ‘man in charge’ as he continues projecting his authoritarian personality. Dr. Bart Rossi, PhD. provides his perspective on WINK News with Cory Lazar.

Donald Trump went as far as ignoring CNN altogether, stating they were a terrible network and calling them  ‘fake news.’  But all theatrics aside, what did we as citizens learn from the press conference, if anything, and do they care?

Trump again said he will not divest himself from his business, nor place it in a blind trust; he will turn it over to his children to run. According to Mr. Trump he will then not discuss the business with them. “Is this enough?” Mr. Lazar asks. “Do people care?”

Dr. Bart Rossi, a political psychologist said that Trump continues to deflect these issues well, and that he and his attorney have bulldozed through it, fairly unscathed by it. To Mr. Lazar’s question, “I think that people are more concerned with their own lives, their own pocketbook, and the Trump Organization is distant second.”

Obamacare was at the center of discussions, as Trump says they are going to repeal and quickly — maybe simultaneously — replace. Dr. Rossi said he thought Trump handled himself on the issue, being authoritative and ensuring that the healthcare system will be replaced. However, as a career-long clinical psychologist he said “it’s hard to do healthcare, it’s a lot harder than many of the politicians say it is.”

Cory Lazar asked is this was ‘make or break’ issue for Trump, and Dr. Rossi confirmed that he thought it was. “He avoided the questions — will everyone now covered still be covered with the new replacement –, there was no substance, but I thought for this press conference he handled it and said it will be great. We’ll see, because the next press conference will be much more about policy.”

Cory and Dr. Rossi talked about those two issues and then delved into the cabinet picks. Good picks, bad picks,  watch the episode to find out.