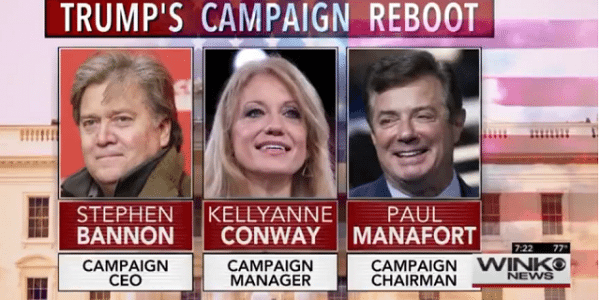 Trump Reboot Shakeup, Hillary and More with Dr. Bart Rossi on WINK News (ABC Florida).  Donald Trump has been losing ground in the key battleground states according to recent polls. He shook up his campaign team, again For the better or worse?

The Donald says he has some big plans to fight terrorism, while Hillary is focused on the economy. This comes amid a major campaign reboot for the Republican nominee. WINK News political expert, Dr. Bart Rossi, stopped by the studio to discuss his thoughts on Trump’s campaign shake-up.

Appointing Stephen Bannon, who was executive editor of Breitbart, a pro-Trump media outlet, as the new Campaign CEO confused Dr. Rossi.  “This is just more Trump, more extreme right, more aggressive. I’m not sure why.  He [Trump] already has that support; he needs moderates, and I don’t see  Bannon helping him achieve that.”

” Kellyanne Conway on the other hand I think was a terrific move for Trump. She is bright, a good pollster, and  can perhaps better inform Trump when he is in Ohio and in Florida, about issues that affect the people there. Help keep Trump on message.

What is Trump doing wrong with the black a community? Why is Hillary Clinton being less specific than she could be at this point in time? These questions and more answered in this edition of Campaign Central.