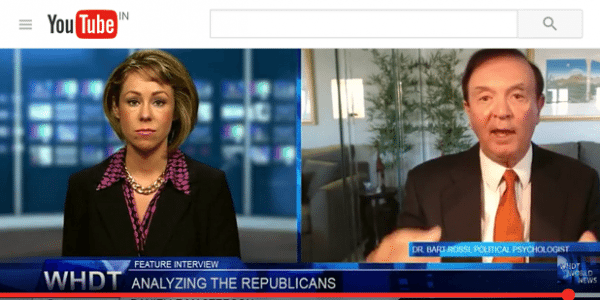 Trump is Winning the Battle Yet Losing the War

During a recent interview analyzing the Republicans town hall debate [by WHD-TV], political psychologist Dr Bart Rossi, PhD says Donald Trump is winning the battle yet losing the war; in other words winning the support of the republican base, but alienating voters of the general election.

He agreed that Cruz most likely did start their latest tiff of attacking each other’s wives, of which the Cruz camp took the first shot: publishing a near nude photo of Mrs Trump from her earlier modeling days. The Trump camp then retaliated with an unflattering photo of Mrs Cruz.

In an interview with Anderson Cooper, Trump’s response — when asked about the seemingly childish action – was “Cruz started it” Cooper stated that that response was something a five year old would use as a defense.

Asked if he thought that the cat-fighting was due to a lack of substance, Dr Rossi agreed, saying he was amazed not only about the lack of substance, but that in the town hall debate the other day how they flat out avoided answering the direct questions being put to them For example, the dairy farmer who was concerned about all the immigrants he relied on to keep his farm running and fearing they’ll all be deported.

Trump is Winning the Battle Yet Losing the War

When asked to explain why with the lack of substance and the in-fighting that the voters continue to support them, Dr Rossi offered that there is a segment of society that wants to hear only what they want to hear, and disregard the rest.

During a discussion about character Dr Rossi responded to the incident where Donald Trump’s campaign manager has been charged with assault. “love him or hate him Trump is a great marketeer; he has a knack of taking situations and turning them around to his advantage. In this instance saying he will stick with him, his base will likely see that as an authoritative move, loyal and strong.”

Regarding a national poll that indicates that 2/3 of Americans feel torture is OK. against terrorists, Dr Rossi notes that yes, he believes Trump is somewhat fueling this by feeding off people’s anger. But he also notes that by intensive investigation of his own that almost every report he has read supports the position that torture doesn’t work. “McCain knows this to be true, and the president’s opposition to torture is on the right side of history and research.”