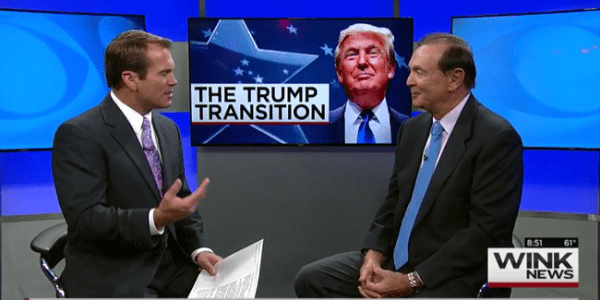 A unique Trump presidency begins tomorrow as the man who shocked the world is sworn in as president. What can we expect? Dr. Bart Rossi, PhD talks with WINK News about the psychology behind it all.

Rob Spicker says Trump has a big opportunity. That Mr. Trump has set this unique stage. Dr. Rossi joins him the studio to look at the psychology behind the challenges Trump faces.

They discuss what Trump should do; what he’ll likely do; and what people will expect him to do. Dr. Rossi says that Trump has situated himself as the authoritative leader, the boss, and will likely continue that and smack down anyone that gets in his way.

However, he notes, this is not the campaign, this is the real deal, and actions and policy will ultimately define him, not words. He has separated himself from both parties, effectively becoming a part of one, a populist leader. That creates big challenges ahead for Trump, he points out. “He needs to really be the president for all people; he can’t go too far right or too far left. He can’t only focus on tax breaks for the wealthy.  In order to be effective he is going to have to more in the middle than people expect.”

He also needs to move quickly and effectively, as he doesn’t have the majority of voters behind him. He says is going to repeal Obamacare o keep his base happy, and the republicans in Congress have begun in that direction, but he also needs to replace it with something that makes sense, and quickly.

The Trump Transition: An Opportunity for Unique Success